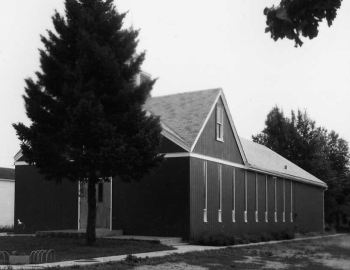 The Wonder Lake Gospel Center (note the name change) had a small and humble beginning in April, 1945, when Mr. and Mrs. Morris Ness brought a group of six children into their living room to teach them the word of God. Mr. Ness enlisted the support of several Christian friends and they began to gather young and old on Sunday afternoons to study the word of God. At that time, there was no church of any denomination in the Wonder Lake community. The aim and purpose of the group was to establish a nonsectarian and non-denominational work for the Lord in Wonder Lake.

The small church received no financial support from any outside source and those of the Center firmly believed that God was able to supply the necessary funds for His own cause through the voluntary and cheerful giving of his people. After the Ness family moved away, the work continued in the home that had been theirs. More room was needed, so the partitions were removed until the entire front of the house was a church, the basement was made into Sunday School rooms, and the back portion of the house was the parsonage.

The following article was printed in the Elgin Daily Courier News in early 1958. The church building that was remodeled was the original building on the east side of Wonder Lake on Hancock Drive. Although the building has been remodeled at least two more times since 1958, it appears very similar to what it looked like when it was a church. Today the building houses the Justen’s Wonder Lake Funeral Home. Those of us who grew up in that church building are amazed at how small it seems today compared to how we remember it from the 1958-1971 era. 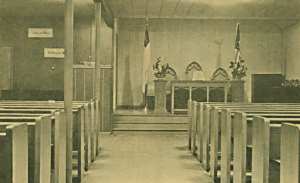 The church was started 13 years ago and has had a full-time pastor since January 1947. Rev. Richard N. Wright, pastor has been at the Wonder Lake church for 2½ years. The church features a miniature white spire and steeple and has an exterior of brown, vertical grooved paneling. It is trimmed in white. 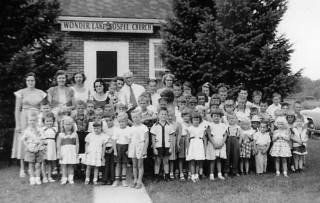 A Sunday School class from the 1950’s

The church has a congregation of several hundred people since it serves the vacation area people who live in Wonder Lake or its subdivisions for several months of the year. Seating capacity in the church now is 150 persons.

Featured speaker at one of the programs was Rev. T. M. Wright, father of the present pastor. Rev. Wright has been a pastor for 42 years, and he came to the ceremonies from his present church in Muskegon, Michigan.

Rev. Franklin Anderson, guest speaker at the regular morning service was the former pastor at the church. Climax of the evening program was a sermon by Dr. R. H. Belton from the Moody Bible Institute, Chicago.

A dedication banquet was served to 216 persons Saturday night by the Ladies Mission Guild. Linn Loshbough, Woodstock is chairman of the board, Roy E Swanson, Wonder Lake, is chairman of the trustees and was building committee chairman. 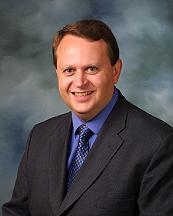 (2002 – Present) Pastor Dan was born and raised downstate, in the Peoria, Illinois area. He is a graduate of Moody Bible Institute and Trinity Evangelical Divinity School. He served in a variety of ministries at the North Suburban Evangelical Free Church in Deerfield, Illinois following his graduation from seminary. In the summer of 2002, he was called to serve as the fourth pastor in the history of the church. In the years since then, with the faithful service of many members of the body, WLBC has experienced steady growth. Contact Pastor Dan at pastordancox@wlbiblechurch.org. 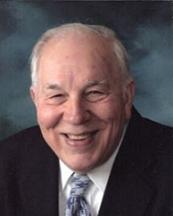 (1982 – 2000) During the tenure of Pastor Conklin, the Family Center was added, which nearly doubled the size of the church building. Pastor Conklin’s family contributed quite a bit to the church during his tenure. His son Dan was our associate pastor and Worship leader for about 2 years. His daughter Deb organized short term missions trips, lead a children’s choir, was church secretary, and an important part of the Sunday Worship Team. His wife Charlene was also very involved with the church music. She faithfully played the piano and keyboard for solos, ensembles, choir, and the worship team. She was very creative and produced most of the Easter and Christmas programs during his pastorate. 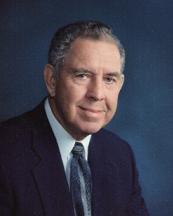 (1955 – 1981) Richard N. Wright preached his first sermon at Wonder Lake Bible Church on Mother’s Day in 1955. He often made the comment that for a young man preaching his first sermon on Mother’s Day it was quite a challenge. He knew little about mothering except, he had one, and his wife was one. Even though he could never remember the context of his sermon, he must have passed the test because he was called by the membership to be the second Pastor of the church in July 1955.

In 1955, shortly after he graduated from Moody Bible Institute Pastor Wright was contacted by five couples to see if he would be interested in Pastoring a growing independent non-denominational church in Wonder Lake. He must have been the Wright man for the position because he Pastored the church for the next twenty-seven years.

Although he never pastored a church himself, he had grown up in a pastor’s home and always felt the call to serve the Lord. His father, Thomas M. Wright, was a pastor in Michigan, and had founded the Seamen’s International Christian Association Mission. 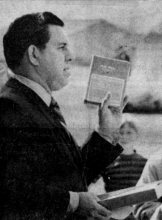 His path to Christian service was not always straight. He followed a few detours in his journey. In his senior year of high school, he volunteered for the Navy during World War II. After he returned home in 1946, he attended Muskegon Community College (a branch of Michigan State University) and supported himself as a bricklayer. In 1949, he married Velma Olson. 1950 brought the Korean Conflict, and he once again joined the Navy to serve. This time, when he returned home from his military service, he entered the Moody Bible Institute. In 1955, when he became the pastor of Wonder Lake Bible Church, he brought with him his wife Velma and three year old son Rick.

Pastor Wright was a great kidder, and loved to tell corny jokes. Velma was not always amused by his constant kidding, and would frequently say, “No jokes, Dick.” One of his favorite stories was how he and Velma met. As he told the story, they had met in a revolving door, and they had been going round and round ever since. Each time she would hear this story she would either complete the punch line herself or roll her eyes as if to say “Not again, Dick.” 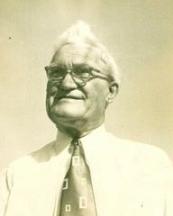 (1947 – 1955) Rev. Franklin W. Anderson was the church’s first pastor. The building referred to as the Ness home is on the east side of Wonder Lake on Hancock Drive. The building has gone through many renovations and today is the home of the Justen’s Wonder Lake Funeral Home.

As the church began to grow, Frank W. Anderson was called to be the first Pastor of the Wonder Lake Gospel Center in January of 1947. Pastor Anderson had served the First Evangelical Free Church of Chicago for 33 years before coming to Wonder Lake. Pastor Anderson was enjoying his retirement when his son Franklin suggested he take on the challenge of shepherding the young church.

Pastor Anderson and his wife Elizabeth both had Swedish accents. She was soft spoken, but he had a strong voice and spoke with authority. He had lots of white hair and because of poor eyesight, he wore thick glasses. He evangelized all the businesses on Hancock drive, passing out tracts and talking to people. No business was off limits to his witness, not even the taverns. His usual attire was a white shirt with starched collar, tie and a suit. In the wintertime, Pastor Anderson would be seen with his dark dress overcoat and fedora hat, driving a big black car. 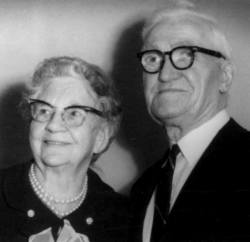 Pastor and Mrs. Anderson and their black cocker spaniel Patches lived in the building on Hancock Drive that housed the church. They had Sunday School classes in their bedroom, kitchen, and dinning room. On Sunday mornings the Worship Services held in the large front room of the home.

Under his leadership from 1947 to 1955, the church continued to grow. On Sundays the building was overflowing with worshippers. Sunday services included Sunday School, Morning Worship and an evening Gospel Service. On Thursday there was a Midweek Prayer and Praise service. Often, special musical groups would travel from Chicago to present their ministry in the Sunday evening service. Also, a four-day missions conference was held each year, featuring speakers from Trinity and Moody. It was during his tenure as Pastor that the first missionaries Jack and Flora Loshbough were sent out from the fellowship to the Belgian Congo.

Pastor Anderson resigned in May 1955 due to his failing eyesight. After his resignation he had eye surgery and recovered nicely. He and his wife moved back to Chicago and lived there until the late 1960’s when he passed away at almost 90 years of age. After his death, Mrs. Anderson moved to the Fairhaven Christian Home in Rockford and lived until age 93.

In his parting letter to the church, he wrote this message:

Circumstances over which we have no control made it necessary to tender my resignation to the Church I love so well. The time of parting has come.

To the people of our community I wish to say that, during my ministry here at Wonder Lake since January 1947, I have constantly and prayerfully sought the highest and very best interest of all. My aim and purpose in living, preaching and teaching the Word of God has ever been that of leading men and women to Christ — the one and only Sufficient One for every human need. I wish to thank you for your many expressions of confidence and good will. The work here at the Gospel Church will by the Grace of God continue under competent and consecrated leadership. Your continued good will and support of this work will be greatly appreciated. We firmly believe that this Church has a very definite mission to perform.